The newPark and the transport infrastructure

The companies in the newPark will benefit from a dense highway network in the region:

Large parts of the Central Ruhr and the Münster land region can be reached within 30 minutes; within an hour’s drive, a large area between Venlo/Netherlands in the west, Leverkusen in the south, Osnabrück in the north and Gütersloh in the east can be reached. 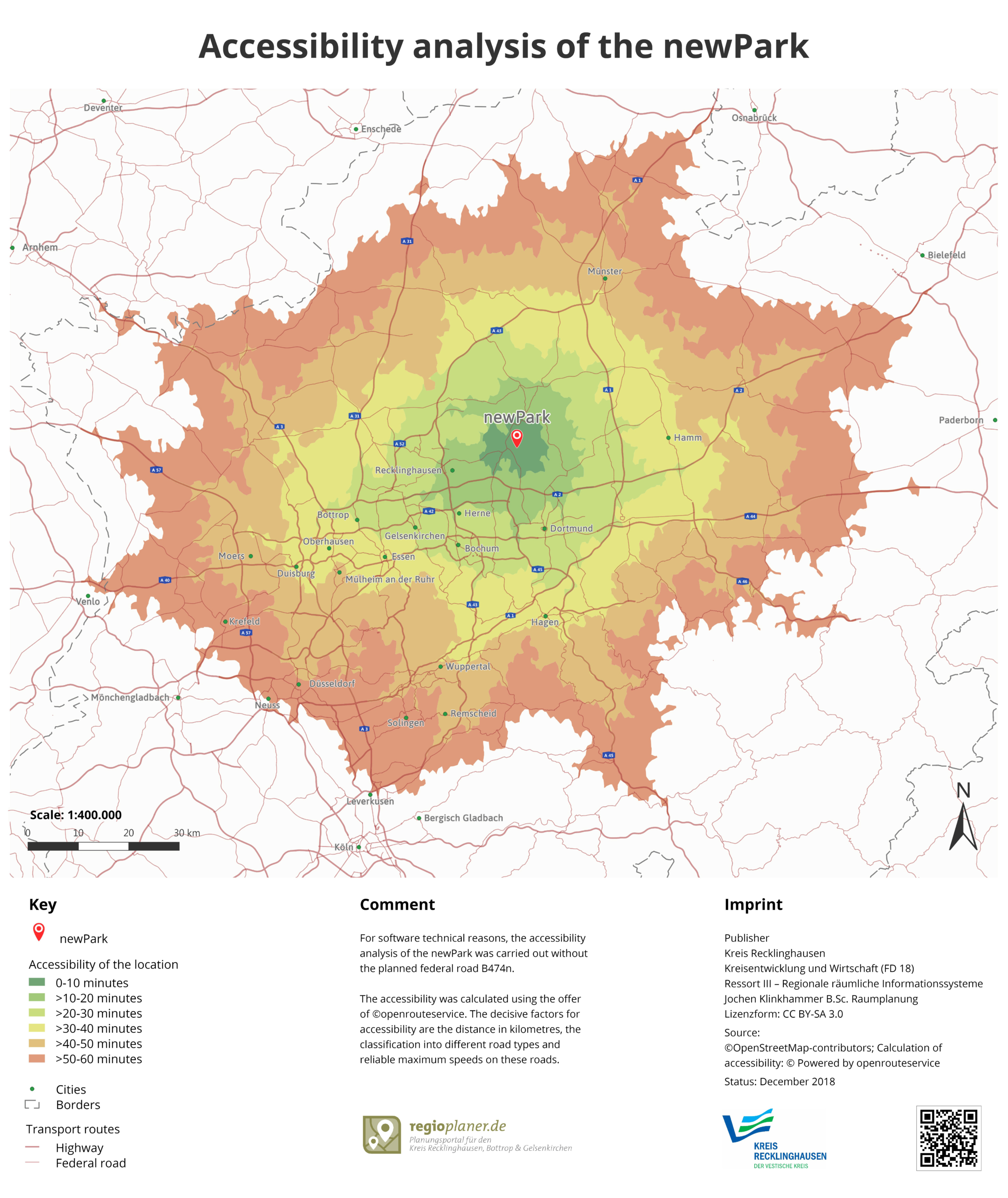 The development of the newPark will be carried out through the Federal road B 474n which will create a new north-south link with a total length of 12 kilometers. The B474n represents an extension of the A45 freeway to the north and will relieve the cities of Datteln and Waltrop of through traffic. Construction of the first section, the Datteln bypass, began in October 2019 and is scheduled for completion in 2022. The planning approval process for the second section, the Waltrop bypass, is currently underway.
More information at Straßen.nrw 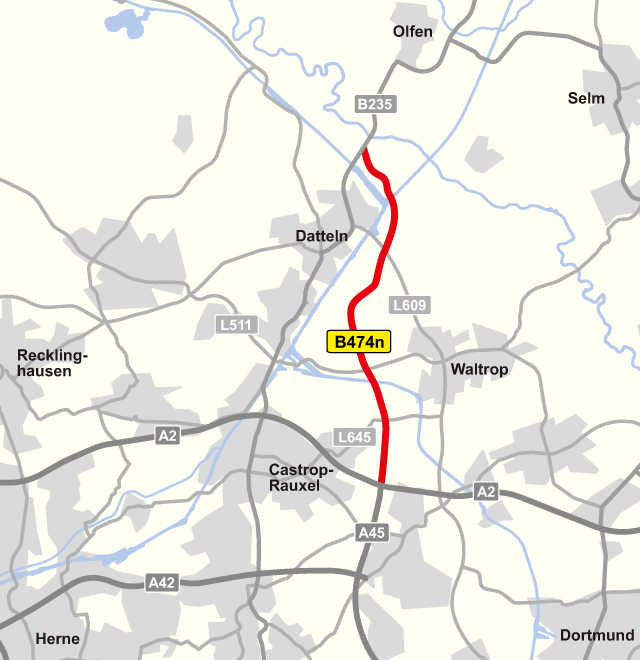 Airports
Access to the global air transportation network is provided through the international commercial airports in Düsseldorf and Cologne/Bonn which can be reached from newPark in 75 or 90 minutes by car. 30 kilometers or 40 minutes by car from newPark is Dortmund Airport, from which 50 destination airports throughout Europe are served. The privately operated commercial airport Marl-Loemühle is located in the immediate vicinity of the newPark (25 minutes).

Waterways and ports
The Datteln Canal Interchange is the intersection of three waterways: The Datteln-Hamm Canal, the Rhine-Herne Canal and the Wesel-Datteln Canal provide access to all major business locations in Germany and Europe. Duisburg, the largest inland port in Europe (50 million tonnes of goods per year), and Dortmund, the largest canal port in Germany (3 million tonnes of goods per year), play a prominent role in the port system of the Ruhr Conurbation.

Expansion of the transport infrastructure:

Siding for the newPark:
A feasibility study (Ingenieurgesellschaft für Verkehrs- and BauManagement mbH (IVB) 2014) has shown that a direct rail connection of the newPark is possible in principle: It is recommended to connect to rail line 2250 (Oberhausen-Hamm), a modern and efficient freight rail line with good connections to higher-level junctions. The siding is to branch off southward from rail line 2250 at the Datteln-Hamm Canal.

Expansion of public transport lines:
Both the traffic report and the mobility concept recommend new public transport lines: Direct bus connections to Datteln’s city centre and to the centres of the adjoining cities of Waltrop and Selm are indispensable – ideally through a “newPark ring line”. Further connections to the north through Olfen to Lüdinghausen should be examined.

Expansion of road junctions
The current traffic report by the engineering firm Brilon Bondzio Weiser (2018) has examined the traffic loads in the regional road network, taking into account various assumptions – and comes to the conclusion that an expansion of important intersections makes sense in any case, irrespective of the development of the newPark:

“In summary, it can be stated that structural measures are required at various intersections of the road network under consideration in order to cope with the traffic loads to be expected in the future. However, these are independent of whether the newPark is realised or not.”

In addition to the classic transportation infrastructure, a future-oriented mobility concept has been developed for the newPark: The aim is to promote sustainable and environmentally friendly mobility behaviour among employees – through more cycling and public transport, but also through intelligent mobility management and sharing concepts.